Procida is one of the smaller islands of the gulf of Naples but this year will be the biggest because it is the capitol of the Italian culture 2022.

Thanks to this nomination on the island there will be 150 events with the participation of 350 artists coming from 45 countries.

The island remained outside the circuit of massive tourism, conserving its original Mediterranean beauty. It well represents the concept:” Identity is a colour”.

In fact, it is a palette of colours surrounded by the blue of the sea. Every house has its own chromatic shade and all together create a multi-coloured landscape.

Procida has a tangle of small streets where the houses are built one upon another creating an original urban architecture.

Once arrived at the island by boat from Naples, the tour will reach the Castel named “Terra murata“, which dominate the island and was a prison for a long time.

Near the castle rises the San Michele Abby, richly adorned, with valuable artworks. From there you will walk to the most characteristic part of the island named “Corricella“.

It is a coloured fishing village with a small port and became famous because was the set of a famous movie: “The Postman”. There you can stop for lunch in a typical restaurant.

After that free time and return to Naples. 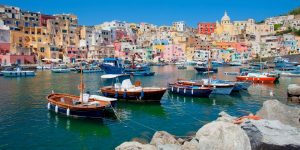 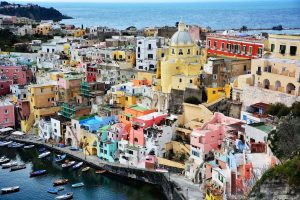 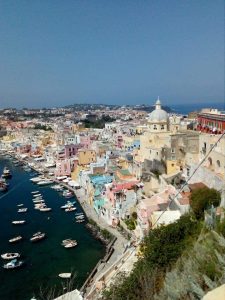 Ask for prices and availability
We use cookies on our website to give you the most relevant experience by remembering your preferences and repeat visits. By clicking “Accept All”, you consent to the use of ALL the cookies. However, you may visit "Cookie Settings" to provide a controlled consent.
Cookie SettingsAccept All
Privacy Overview